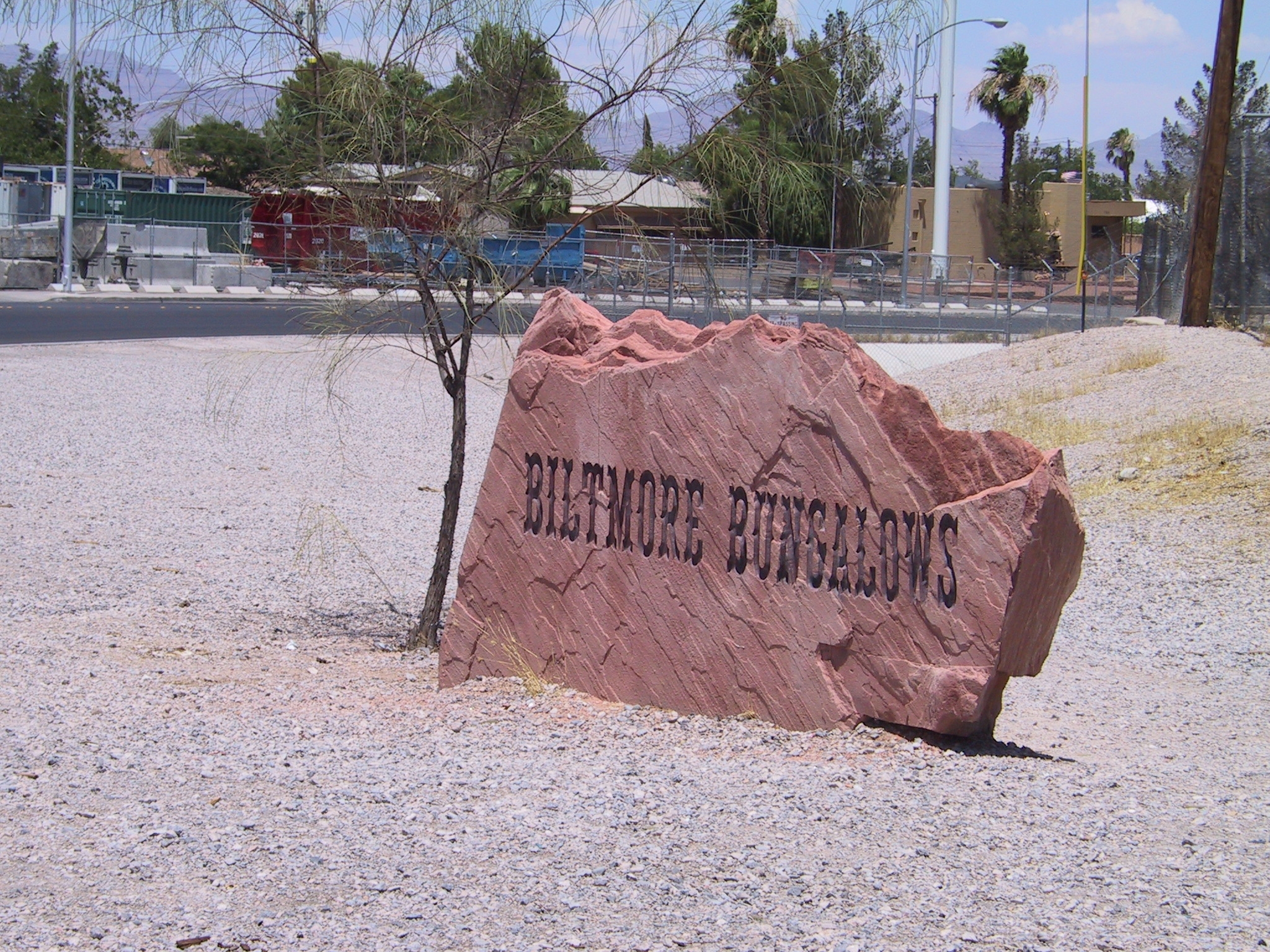 The WWII neighborhood was named for the Nevada Biltmore Hotel which opened nearby in 1942. A WWII housing shortage called for the construction of several hundred homes for military personnel and their families. The federal government approved the Biltmore Village for construction. Typical wartime housing, the homes were small and one story, built in the modest Cottage and Ranch styles. Much of the original neighborhood remains today, boasting curved, tree-lined streets and welcoming front porches.

The initial plat for the Biltmore Subdivision was filed by Biltmore Homes, Inc. on December 21, 1941, on property formerly owned by the Union Pacific Railroad (Mooney 2003b:9). The irregularly-shaped subdivision consisted of 97 lots located to the north of the I-15 and I-95 interchange along the west sides of N. First Street and Biltmore Drive and the south side of Palm Lane on the north (Figure 29). The lots were situated within six blocks (e.g., Blocks 1–6) that varied in size due to the subdivision’s irregular shape. The lots alsovaried in size and shape, with the smallest lots located adjacent to street intersections and the largest lots located to the north of Biltmore Drive and along a cul-de-sac at the east end of N. First Street (see Figure 29). Streets within the subdivision were narrow and curvilinear. Housing setback was also curvilinear, with some lots exhibiting as much as 55 feet of setback and others having a setback of only 20 feet. A newspaper article describing the addition noted that the variation in setback was designed to “avoid the old time uniformity of house fronts” (Mooney 2003b:9). Additionally, a 5-foot-wide utility easement was present along the rear of each lot.

Homes planned for the addition were designed by Phoenix, Arizona architect and Secretary of Biltmore Homes, Inc. Orville A. Bell. Prospective buyers could choose from 16 elevations designed by Bell, with the stipulation that their home had to be a different elevation than the ones adjacent to it (Mooney 2003b:9). Although a 1942 newspaper advertisement for the original subdivision depicts a cottage style home with a central chimney, double hung, multi-lite windows, and a one-car attached garage, the majority of the homes within the addition were built in the FHA-prescribed Minimal Traditional architectural style (Figure 30). All of the homes were to be a single story with a shaded overhang, or service porch, and each was to contain two bedrooms and one bathroom. Additional rooms included a living room, dining room, and kitchen. Homes were advertised with a concrete tile exterior, but were predominantly constructed of concrete block with brick veneer (Mooney 2003b:9).

In 1942, three consecutive annexations were filed to the original addition. All three of these annexations—known as Biltmore Addition Annex Nos. 1, 2, and 3—were filed by local businessmen Archie C. Grant, Al E. Cahlan, and E. W. Clark of Victory Homes, Inc. Annex No. 1 was approved by the Board of Commissioners and city on March 4, 1942, and Annex Nos. 2 and 3 were both approved on May 4. Annex No. 1 included 43 lots—one of which was reserved for an elementary school (known today as the Biltmore Alternative School) (Figure 31). Annex No. 2 was slightly larger, with 55 lots located along N. Fourth Street, Bell Drive, and Bonanza Way (Figure 32). The largest of the plats, Annex No. 3, was situated between N. Fifth Street (now Las Vegas Boulevard), North Ninth Street, McWilliams Avenue, and Bonanza Road and consisted of 61 lots (Figure 33). Unlike the other three plats, the third plat had lots for commercial development and included plans for the construction of a hotel and shopping center (Mooney 2003b:10). Additionally, the lot on the corner of Bonanza Drive and N. Ninth Street was reserved for the construction of the North Ninth Street School. Homes within these later annexations were generally the same as those of the original tract, although the final phase of development also includes some homes built in the Ranch architectural style, which according to Mooney (2003b:10), “succeeded the Minimal Traditional as the most common WWII and post WWII suburban housing type and style.” Newspaper accounts also indicate that dwellings within AnnexNo. 3 were slightly more expensive, with the original price of at least 10 homes averaging between $5,000 and $6,000 (Mooney 2003b:11). This change in price was presumably due to inflation, as all of the buildings were constructed in 1954 (Las Vegas Review-Journal, 19 March 1945).

Today the subdivision contains 206 single- and multi-family dwellings and commercial properties (Photograph 13 and Photograph 14). Construction years for 205 of these buildings are included in Table 3.Assessor’s records suggest that the remaining building was constructed prior to the platting of the originalsubdivision in 1936. This building, which is located within Annex No. 3 at 721 N. Ninth Street, is similar in style to those built within the original addition, suggesting that the build date is likely a typographical error.

The subdivision remains much the same as it did during the historic period (Figure 34). Aerial photographs confirm that residential construction within the addition was largely completed by 1950, with additional commercial development occurring along N. Las Vegas Boulevard (now N. Fifth Street) and E. Bonanza Road between 1950 and 1965. Seventeen vacant lots—once home to single-family residences—are also present within the addition. Twelve of these lots are located within the original addition along the west side of N. First Street. Aerial photographs suggest buildings on all 12 of these lots were razed between 1994 and 1999. Only one and four lots are vacant within Tract Nos. 2 and 3, respectively. According to Mooney (2003b:11), many single-family homes within Annex No. 3 have been converted to multi-familyhousing. Records on file at the Clark County Assessor’s office also confirm that at least ten single-family residences within the original plat and Annex No. 2 were converted to duplexes and fourplexes since 1970. Additionally, aerial photography suggests that all of the original buildings on Block 1 of Annex #3 were demolished sometime between 1973 and 1983. An apartment complex and parking lot is situated on the southern half of the block, and the Neon Museum is located on the northern half.