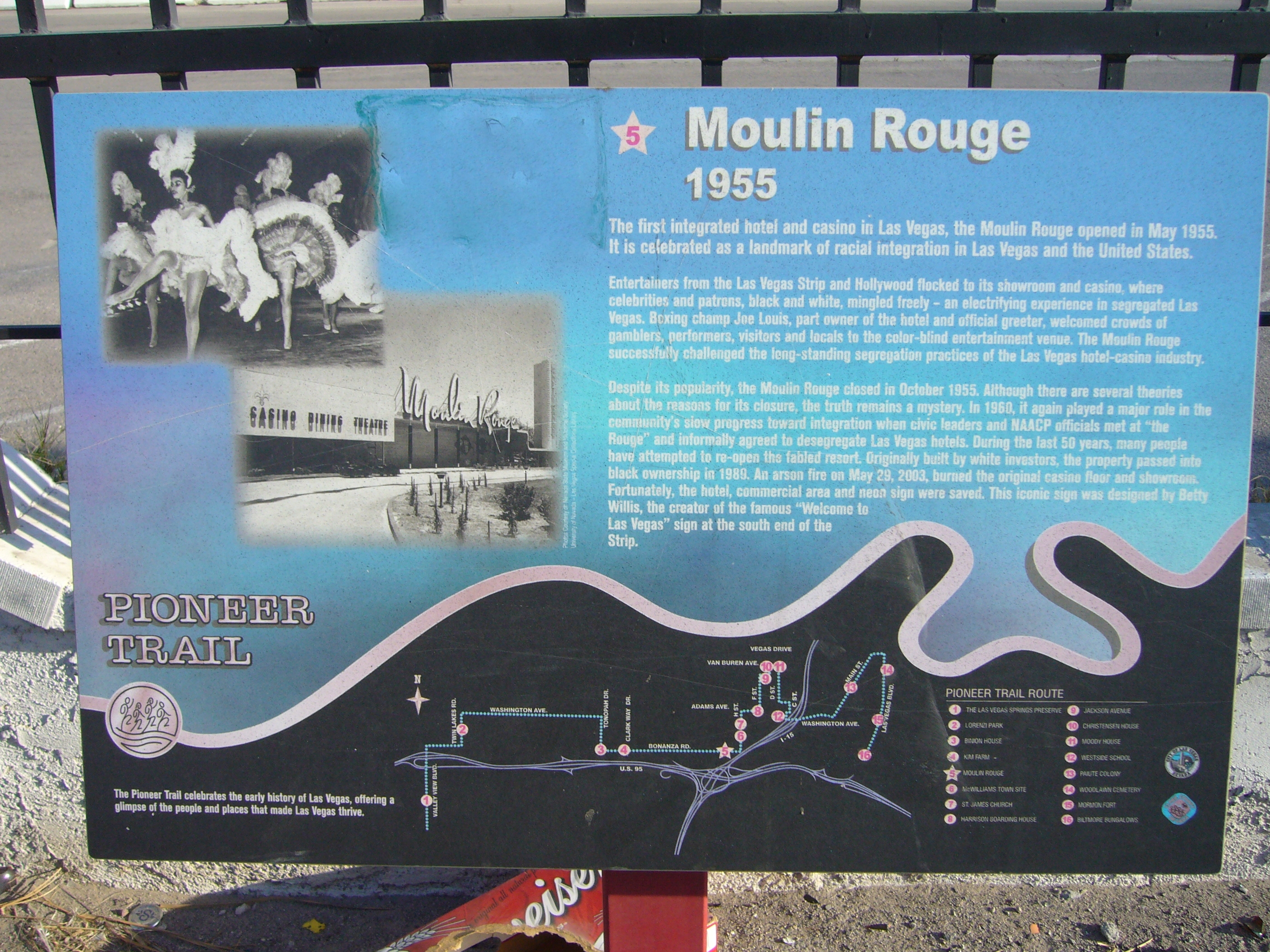 The first integrated hotel and casino in Las Vegas, the Moulin Rouge opened in May 1955. It is celebrated as a landmark of racial integration in Las Vegas and the United States.

Entertainers from the Las Vegas Strip and Hollywood flocked to its showroom and casino, where celebrities and patrons, black and white, mingled freely – an electrifying experience in segregated Las Vegas. Boxing champ Joe Louis, part owner of the hotel and official greeter, welcomed crowds of gamblers, performers, visitors and locals to the color – blind entertainment venue. The Moulin Rouge successfully challenged the long – standing segregation practices of the Las Vegas hotel – casino industry.

Despite its popularity, the Moulin Rouge closed in October 1955. Although there are several theories about the reasons for its closure, the truth remains a mystery. In 1960, it again played a major role in the community's slow progress towards integration when civic leaders and NAACP officials met at "the Rouge" and informally agreed to desegregate Las Vegas hotels. During the last 50 years, many people have attempted to re-open the fabled resort. Originally built by white investors, the property passed into black ownership in 1989. An arson fire on May 29, 2003, burned the original casino floor and showroom. Fortunately, the hotel, commercial area and neon sign were saved. This iconic sign was designed by Betty Willis, the creator of the famous "Welcome to Las Vegas" sign at the south end of the Strip.

The first integrated hotel and casino in Las Vegas, the Moulin Rouge opened in May 1955 and closed six months later. During that short time entertainers from the Strip and Hollywood flocked to its showroom and casino, where celebrities and patrons, black and white, mingled freely. Much of the original buildings burned in 2003 and 2009, and the remaining casino facade was demolished in 2010. The iconic signs designed by Betty Willis, survived and was moved to the Neon Museum. The Site is recognized as a landmark of racal integration in Las Vegas and the U.S., and remains listed on the local and national register of Historic Places.

Las Vegas was a deeply segregated town in the 1940s and 1950s and it was frequently referred to as the "Mississippi of the West". Black patrons were not allowed to enter most casinos on Fremont Street or the Strip, and black entertainers were often refused accommodation at the luxurious resorts where they performed. In May 1955, the elegant "Moulin Rouge" on Bonanza Road opened as the first interracial casino and hotel in Las Vegas with 105 rooms. It was variously called the "First Multiracial or Integrated or Cosmopolitan Hotel" in Las Vegas. Blacks and Whites were welcome. All the dealers at the Rouge were white. They were the only jobs at the hotels that were not filled by blacks. Prior to the Moulin Rouge, blacks couldn't deal or be involved in any casino games, so there were no experienced dealers to draw from. The Platters opened the Moulin Rouge in the big opening night. Typical night at the Moulin Rouge would have Sammy Davis, Jr., on stage, with George Burns and Gracie Allen, Nat "King" Cole, Jack Benny and Mary Livingston, Joe E. Lewis, Frank Sinatra, Peter Lawford, and Harry Belafonte, and 350 others watching the hottest show in Las Vegas from the audience. Despite its initial success and popularity, the Moulin Rouge closed after only six months due to financial mismanagement. In 1960 it was used for a historic signing of an agreement to abolish housing and other forms of racial segregation on the Strip. Although entered on the National Register of Historic Places in December 1992, subsequent owners have met with little success in returning it to its former glory. Efforts to save the Moulin Rouge are ongoing; in April 2002, the Preserve Nevada group added the hotel to their list of Nevada's ten most endangered historical sites. In May 2003, an arsonist's fire destroyed what remained of the Moulin Rouge.

Vintage Las Vegas has many amazing images and information that is very cool visit them directly here.
Second do you know about the Moulin Rouge Sign? What happened to the sign after 1955? The Answer Mo Mart Motel.